Many years ago, Claremont was a part of the vast San Gabriel Mission.  Following the Edict of Secularization in 1834, Spanish missionaries from nearby La Verne served the Catholic population of the area.  In 1934, the formation of the community that would become Our Lady of the Assumption Parish began with the construction of the Sacred Heart Chapel at the corner of what is now First Street and Claremont Boulevard.

In 1945, Father Tanyanne was sent to Claremont to lay out the groundwork for establishing a parish, which was finally accomplished in 1947 by Father John Rengers.  In 1948, the site of the present church at the corner of Berkeley Avenue and Bonita Avenue was purchased, and Father Donald Strange, who served as pastor for almost fifteen years, replaced Father Rengers.  Construction of the church was completed in the fall of 1950.  The parish community experienced considerable growth in the early fifties with an influx of management, professional, and academic personnel because of the development of aerospace and manufacturing industries as well as the several local colleges.  Father Strange lost no time in building a school and securing the Benedictine Sisters to staff it.  In 1955, Our Lady of the Assumption School opened its doors to 200 children in grades one through six.  The following year, two more grades were added, completing the eight grades, with a total enrollment of 285 students.  Very soon thereafter, the parish auditorium was completed, creating space for meeting and large group events for both parish and school. 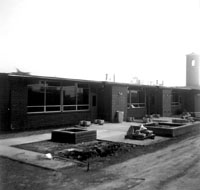 1963, Father William Barry became pastor, and very soon the school facilities were expanded with construction of the Berkeley Building, doubling the school’s capacity. Enrollment reached 630 students in 1965.  At this time, the Benedictine Sisters withdrew from the school and were replaced by the Felician Sisters who, along with a large lay faculty, continued to staff the school until 1996.  A Parish School Board was formed in 1972 to facilitate a closer relationship between the school and the broader OLA and Claremont communities as well as to assist in the financial development of the school.  A decline in enrollment in the 1970’s necessitated closing several classrooms, but the 1980’s saw the enrollment increasing back to its maximum.  In 1987, the two-story building which houses the kindergarten on the first floor and the faculty room on the second floor was built.  The first Kindergarten classes were opened that year.  In 1994, an expansion of facilities for parish meeting and classroom space was built, including a computer lab, religious education offices, and multi-purpose rooms 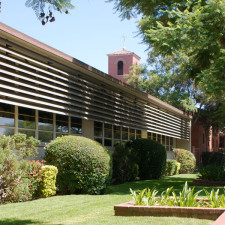 In 1994, Monsignor William Barry retired and Father Thomas Welbers was appointed Pastor.  He continued the tradition of active interest and support for the school for the next 15 years.  In 2009 Fr. Charles Ramirez was assigned to Our Lady of the Assumption.  The first lay principal was hired in 1996 with an all lay faculty and staff.  Continuing the legacy and building upon the solid foundations laid by the religious sisters, Our Lady of the Assumption School has enjoyed renewed growth and stability with solid academic and financial development under each subsequent administration supported by well qualified and committed faculty and staff.

In 2006, the school board which had disbanded in the mid 1990’s was reformed with new purpose and direction.  In 2008 members of the board participated in the Los Angeles Archdiocese Department of Catholic Schools training for the organizational structure for the boards of all Catholic elementary schools.

In 2007, recognizing the need to respond to the challenges of the technological advances, and thanks to the very successful fundraising of the PFA, the school was able to completely update thirty two stations in the Computer Lab, as well as equipping most of the classrooms with new interactive hardware and supportive software.  The technology upgrade was continued through the summer of 2008 to include all classrooms in Kindergarten – 6th grade.

In 2008, one of the major goals of the school’s action plan was fulfilled when the Kindergarten program was expanded to offer full time placement for forty eight children.

Between 2008 and 2010 the global economic downturn was reflected in falling enrollment.  In 2009-2010 as the school set new goals and a new plan of action through the accreditation process “Improving Student Learning”.  This process culminated in the school being awarded a 6 year term of accreditation, having been found to be ‘highly effective’.  The role of the school council was also identified as critical to the future of the school.  Enrollment fell and then leveled off to give average class sizes of 22, and the school council’s role will be critical in developing long term strategic plan, ensuring the long term financial stability and sustainability, as well as plans for development and marketing, facilities maintenance, communications and to examine mission effectiveness.

Between 2008 and 2011, the global economic downturn was reflected in falling enrollment and leveled off in 2011-12 to give an average class sizes of twenty-two.   In 2009-2010, the school set new goals and a new plan of action through the accreditation process “Improving Student Learning”.  This process culminated in the school being awarded a 6 year term of accreditation, having been found to be “highly effective.”  The role of the School Council was also identified as critical to the future of the school.  School Council’s role is critical in developing long-term strategic plan, ensuring the long-term financial stability and sustainability, planning for development and marketing, facilities maintenance, communications and to examine mission effectiveness.

In 2012, the school opened a Junior (transitional) Kindergarten.  The program began with an initiative from the Department of Catholic Schools.  Research indicates that providing four year-olds this early introduction to social emotional and academic skills have a significant advantage in the learning process.  OLA opened its doors to a group of students who turned four years-old by the September 1st deadline.

The OLA community worked together to launch our first ever Strategic Planning Process in August of 2014.  The committee was comprised of faculty, administration, alumni, community representatives, parents, and parishioners.  Catholic School Management led this process establishing goals, objectives, and an action plan.  The official Strategic Plan will be published during the 2016-2017 school year giving clear direction for the OLA Consultative School Board.  This significant achievement coincides with the celebrations for the school’s 60th anniversary.

The 2015-2016 school focused on the celebration of the 60th anniversary and continued advancements on the strategic plan and the OLA Consultative School Board.  OLA was awarded the C3: Ignite Grant from Sprint and the Los Angeles Archdiocese Department of Catholic Schools, which included150 iPads with ongoing professional development to be installed in the 2016-2017 school year.  The teachers attended a series of professional development sessions on core instructional practices.  The school celebrated their first CYO championship game and placed 2nd place in girls basketball.  In the last three years, the OLA community was able to raise sufficient funds to update the school library and advance the technology access for all students.  The library remodel and technical upgrades began at the end of the 2015-2016 school year.